Pink! To Suzette Jordan. To us. And to you, Auntie.

This column was also published in Youth Ki Awaaz, The Speaking Tree, My City for Kids.

A courtroom scene that stormed the internet down; a question of virginity and its safekeeping, and of matters and discussions best kept under wraps. Of police diaries denied, of warrants backed with power and politics. Of alibi and reasoning, and of the usual versus the unusual. Of morality versus law, and of morality of yours versus mine. Or, of whose?


But really, what happened on that fateful night?

You know what's most wonderful about this film, Pink? That, you are not shown that. You're not told what exactly had happened that night, other than for the courtroom questions and cross-examinations. Of police reports vaguely scribbled down over afterthoughts. Of pretenses and lies uncovered through legal cross-questions. Of video footage of CCTV. And yet, they are but only half there. And you don't get to know what exactly had happened that night, still. Until the end titles are running.


Because, whatever happened - does that matter, even? As long as everything else can be granted, even, but not the consent?


Not, not really. Not any longer. What – alone - is important is, there was a dissent. And that, my dear, is final.

“No” - A word. An expression. A decision, in its own right. Without reasons, without debate, without negotiation. Without force. 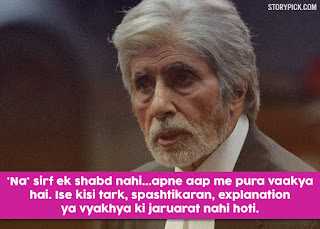 You come out of the theater, braver and stronger. Prouder. Powerful. Chin up. You know, that "no" is your right. The right to say "no". The Right! 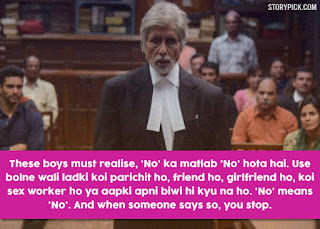 
What only matters is, dear, you.


And you must know your rights in that. Because, it is your body. And hence, simply and automatically, it is your right too. Your right, to say "no". You right, to pour yourself a drink, despite it. 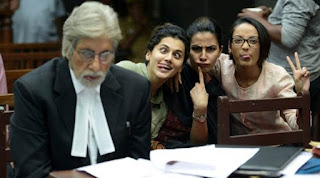 PS: I sat tight on my seat in the theater, tears streaming down. I believe I was not the only one around in that. But then, here’s what. I was also missing someone. Sorely, almost as if it was painful. I don’t know her as much as I’d wish to, and yet I could not stop thinking about her for almost all of the court scene and beyond.

I wish you lived to see this!

PPS: If you're a Bengali, you cannot but be reminded of Dahon. Rituparno Ghosh, know that someone has picked it up from where you left.

You may write me down in history
With your bitter, twisted lies,
You may tread me in the very dirt
But still, like dust, I'll rise.

Does my sassiness upset you?
Why are you beset with gloom?
'Cause I walk like I've got oil wells
Pumping in my living room.

Did you want to see me broken?
Bowed head and lowered eyes?
Shoulders falling down like teardrops.
Weakened by my soulful cries.

Does my haughtiness offend you?
Don't you take it awful hard
'Cause I laugh like I've got gold mines
Diggin' in my own back yard.

Does my sexiness upset you?
Does it come as a surprise
That I dance like I've got diamonds
At the meeting of my thighs?

Out of the huts of history's shame
I rise
Up from a past that's rooted in pain
I rise
I'm a black ocean, leaping and wide,
Welling and swelling I bear in the tide.
Leaving behind nights of terror and fear
I rise
Into a daybreak that's wondrously clear
I rise
Bringing the gifts that my ancestors gave,
I am the dream and the hope of the slave.
I rise
I rise
I rise.