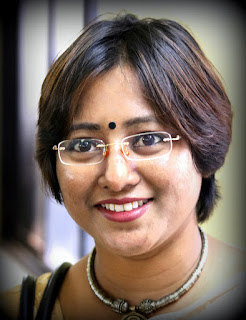 An alumnus of Indian Statistical Institute, Sinjini Sengupta is an Actuary by profession and a Writer, Painter and Public Speaker by passion.

Sinjini writes in several literary genres ranging from social columns to poetry, novels to screenplays, and has won several national and international awards.

As a poet, she won the national level English Poetry contest – Rhyme India – hosted by Times of India in 2016 and several of her poems got published in Feminist anthologies like She The Shakthi, etc.

In fictions, one of her stories won at the South Asia FON contest to be published into an anthology.

As a scriptwriter, she won the Best Screenplay award in International Film Festival PickurFilms among 550 films from across the globe.

She has been conferred the coveted “Iconic Woman award” at the Women Economic Forum in May, 2017.

Sinjini is also the Chairperson of the International Women Economic Forum for the Gurgaon chapter, and in this capacity, she speaks and conducts events and workshops around Women Empowerment issues as well as on Creative Writing and Communication skills. Sinjini has also been invited to various national and international conferences to speak on topics of social causes and women empowerment.


As an orator, she was a finalist at the Quarter-Finals of the World Championship of Public Speaking in 2017. She also won the Triple Crown Award by Toastmasters International, for her Advanced Communications and Leadership accomplishments.

Sinjini has been listed among the top 10 Indian bloggers.

She is honoured to be featured by ICICI Bank in their Advantage Woman Initiative.

Sinjini delivered her first TEDx talk in November 2017, where she spoke about the importance of gender sensitivity in Parenting, and the ways in which we can change our day to day thoughts and actions towards it.


Sinjini's first novel, ELIXIR, was published by Readomania in November 2017. Elixir was launched by Anita Agnihotri at the Valley of Words International Literature and Arts festival in Dehradun, where Sinjini was invited as the Keynote Speaker of the festival.

Elixir had hit the chart and sprinted to rank 3 within hours of going live on Amazon and has been receiving raving reviews ever since.


You can buy your copy of ELIXIR here -- http://amzn.in/an4Cofk